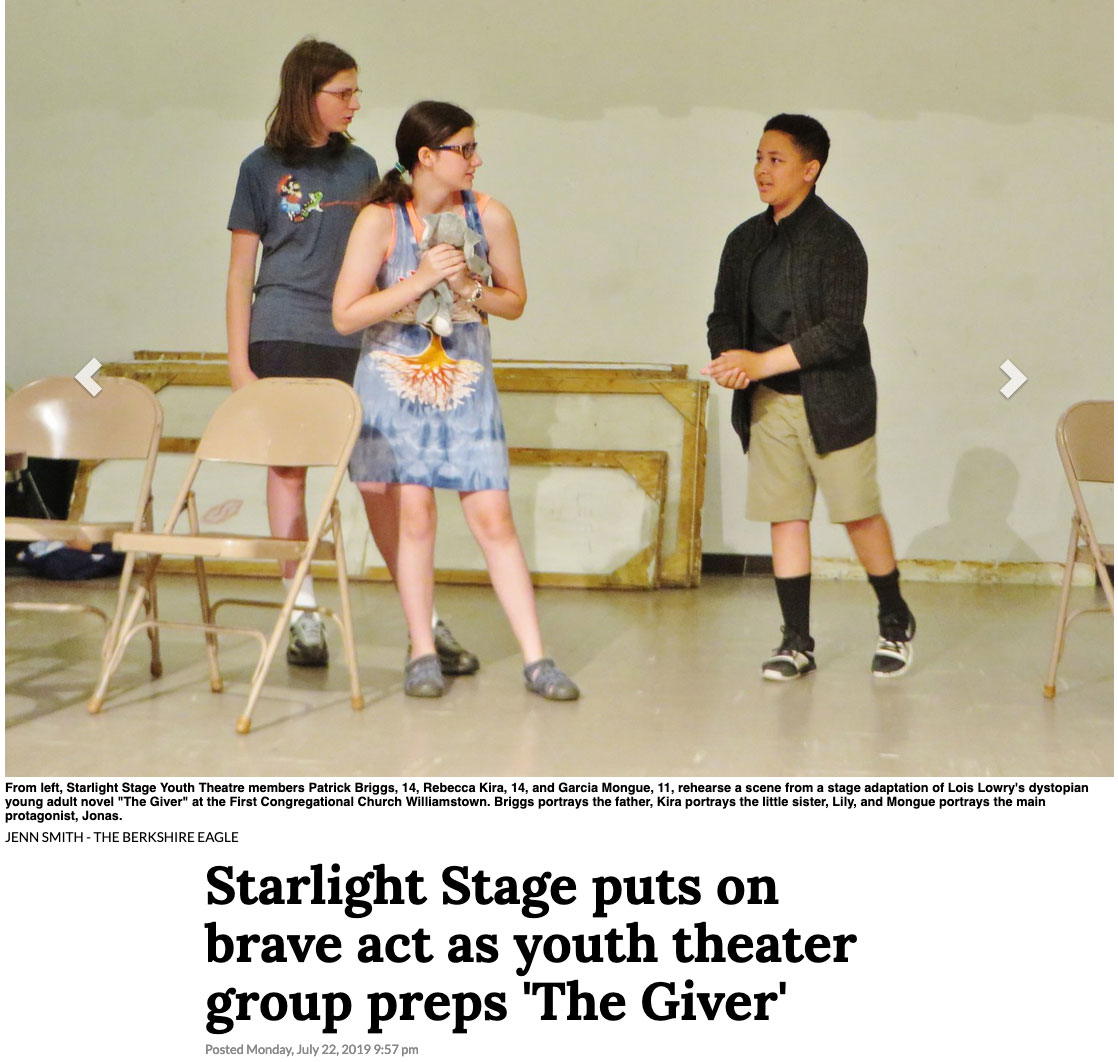 By Jenn Smith , The Berkshire Eagle

WILLIAMSTOWN — In "The Giver," Lois Lowry's 1993 futuristic dystopian young adult novel, the protagonist, Jonas, says to his little sister, Lily, "I feel sorry for anyone who is in a place where he feels strange and stupid."

Debra Kaplan-Kira lives in the state of Florida, but she grew up in Williamstown and got involved in Starlight Stage after hearing an announcement about it at Mount Greylock Regional School.

"It was my first real introduction to theater. I had never memorized lines and blocking. I had a set a friends, but I never had to work with them. It's a different skill," Kaplan-Kira said.

On a recent Monday morning, she was sitting in the auditorium of the First Congregational Church Williamstown, watching her daughter, Rebecca Kira, 14, move folding tables to set up for a rehearsal for "The Giver." The teenager has been with Starlight Stage since she was a very demure 7-year-old.

"Now, this is the highlight of her summer," the mother said, noting that her family travels back here each year so her daughter can participate in the program. She says it offers a more personal and in-depth experience versus programs in Florida.

"I'm very proud — I boast about it. I think the theater has helped her overcome her shyness in different ways," Kaplan-Kira said.

The participants come from different towns, different grade levels, different abilities and experiences with the theater. Burns said the ensembles are typically kept on the small side, between 14 to 22 youths, to ensure that young people are building a rapport with one another.

"We're very strict on behavior in that we treat [all kids] the same here," Burns said. "Everyone has a role."

"It's really fun and enjoyable. They give you more responsibility here than other places," said Sofi Collins, 12, of Pownal, Vt.

"They treat you like adults," said Marguerite Guerrero, 11, of Averill Park, N.Y.

Melanie Moresi, 13, of North Adams, said that means getting a say in how the show looks and feels, and being a part of everything from finding props to putting up posters.

Burns himself said he had never done theater in his life until he went to Berkshire Community College, but became enchanted by the process that went into putting on a production, from lights to lines.

"I fell in love with it. I loved the fact that I had control of the audience. Bob Boland taught me everything I know," he said, referring to a longtime and much beloved fine arts faculty member of the college who was a devoted advocate for the craft.

For Burns, theater became a lifelong family affair, involving his wife, Gail, a local theater critic, and their sons, Brandon and Tristan, who, now grown, continue to help stage the youth productions.

For this year's production of "The Giver," Starlight alumnus and theater professional James P. Briggs, is directing for the first time for the summer program. His children, Patrick and Sarah, are also involved.

"One of the things that has set Starlight apart from its inception is that it trusts the kids with deeper and more meaningful material than most," the director said.

"In an era where many kids never get to perform anything more than junior versions of Disney movies, the chance to participate in a play with real meaning and depth is unique. Theater as an art is meant to challenge the audience, and kids are fully capable of working on more dramatic plays than most of what is typically done," James Briggs said.

Rebecca Kira called "The Giver" a "good choice" for a cast around her age.

The story's characters are adolescents and teens who live in a futuristic society of idealistic law and order and assigned roles. But this existence is later revealed to be a distorted interpretation of Utopia. The Elders of the land leverage the complacency of inhabitants and use chemical injections to control everything from life to death to hormones among its population, in an attempt to prevent feelings of pain or fear.

The story follows the journey of Lily's older brother, Jonas, who, through the guidance of the play's title character of The Giver (Sarah Briggs), reveals the truths of this society, its foundations, and the lengths the Elders will go to to maintain it. It is then up to Jonas to decide whether to follow along or become a defector.

Jonas is portrayed by 11-year-old Garcia Mongue of Williamstown, who says the play is "Very interesting. It makes you think."

Mongue said he more relates to the easy nature of the good-humored character of Asher (Gavin LaForest) versus the authority-questioning Jonas, but, he said, the rehearsals and cast help him with his role. "Everybody's so supportive," he said.

Said the director, "We've had some wonderful discussions throughout the rehearsal process and the kids have really embraced it all." 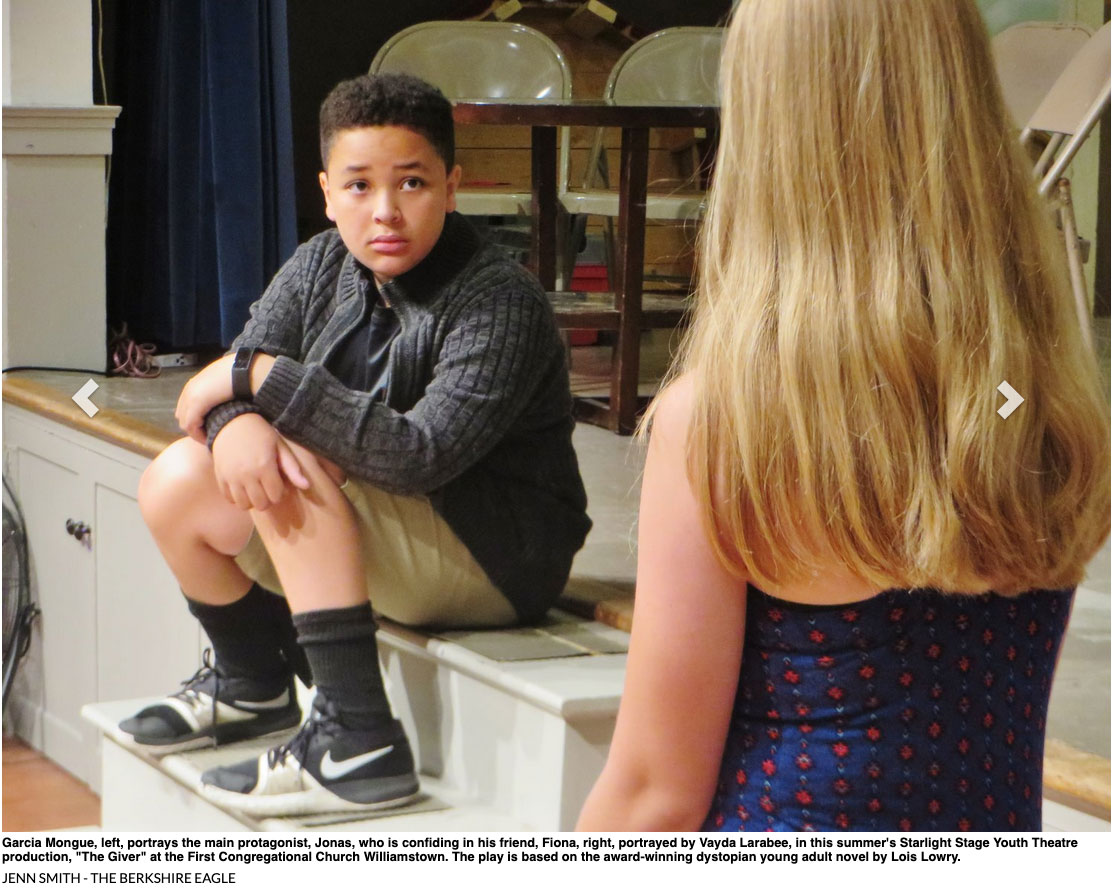